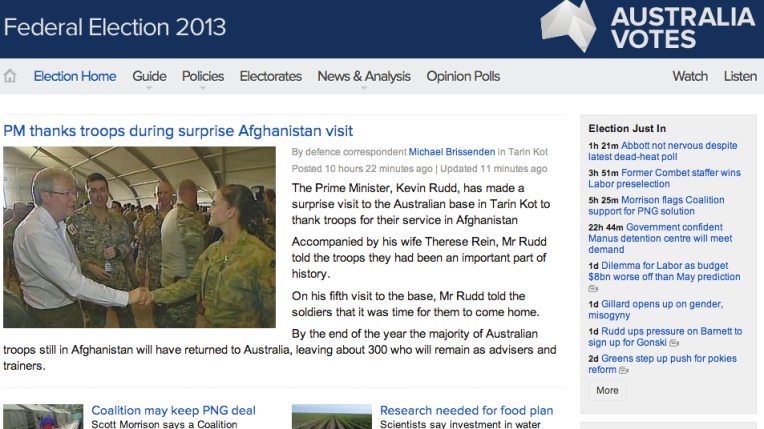 Since Julia Gillard announced an election date for Australians back in January it’s felt like we’ve been in one of the most extended campaigns ever seen in Australian politics. Even with a change in leadership to Kevin Rudd (and a now uncertain election date) it feels even more so that the campaign is well underway.

With “campaign mode” also comes the usual critical eye over our media – who is covering what? What questions are being asked? What questions aren’t? Who are the influencers and what roles do they have to play? It seems that each electoral cycle the same criticisms reemerge. Too much personality, not enough policy. Too many stunts, not enough detail. Too much negativity, not enough vision. Yet as media consumers we surely must accept that most Australians will stray to the light and fluffy than the hard detail. We have to accept that we play a role in the media that gets served to us and if we want better – we must demand it. Here are some of the things that Australians should demand from our media this election.

Lay off the polls

The polls are a favourite plaything of most media outlets and even I can admit to finding the week to week fluctuations of the polls as a source of intrigue and entertainment – but that’s all they are: Entertainment. The polls give us a vague idea of the trends in the electorate, but the obsession with them needs to calm down. Especially when you consider that the fluctuations are often within the margin of error anyway. This year PLEASE lay off the polls.

Can we please get some new voices in the mix? In the 24 hour news cycle I understand that there’s a lot of airtime and white space to fill, but there are thousands of competent writers, broadcasters and commentators who can bring something different to the mix. Our commentators should reflect the diversity of our society and not just the political binary. If I hear any more of what Mark Latham thinks about topic X or Y I’m going to scream.

It’s tempting to chase the scoop or the “gotcha moment” and many of these have defined journalist’s careers, but please ask some actual questions (And preferably about policy at that). How many times do we have to tune into a media conference to hear 20 versions of the same question slightly rephrased in a desperate attempt to make the politician slip up? If you’re going to wedge a politician in a media conference – at least wedge them on a policy issue.

Speed does not = quality

Let’s face it – Twitter is going to go bonkers over the next couple of months and it’s a tempting source of live information. We will also have more citizen journalists producing their own work than ever before, but please don’t pull a CNN and choose speed over quality. Not only does it look bad when you get it wrong, but it breaks our trust as media consumers. If you do mess up, own up to it, take steps to make sure it doesn’t happen again and move on.

This election isn’t about the media. It isn’t about the politicians. It isn’t about their parties. It’s about us – the citizens. It’s about the human impact that these people, their ideologies and their policies will have on our lives for months, years and even decades to come. Now it’s more important than ever to listen to your audiences and find out what they want to know. I accept that a number of factors influence what ends up on our screens and in our papers, but look past the surface, dig deeper into our communities and listen.

As media consumers in the free market we won’t get what we want from our media unless we demand it. If you want the quality of coverage to improve this election contact the stations, the editors, the comment sections and tell them what you want – and if you don’t get it? Make it yourself and lead by example.

This piece has also been published over at AusNPAC. I also put the call out to ask what you would demand if you could ask one thing of the media this election.  Read the responses and join the conversation here or on Twitter @JB_AU